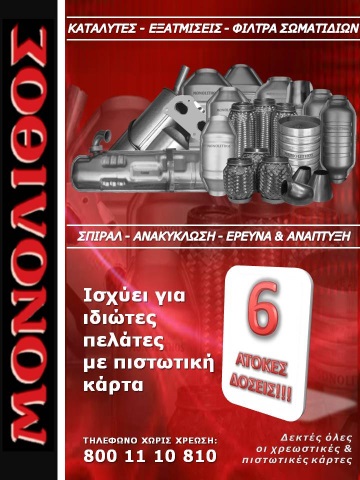 All applications (RIS Task Partner Application Form) must be submitted
to yakoumis@monolithos-catalysts.gr by 16 July 2019 at 23:59 CET

Summary of the context, overall objectives and conclusions of the project

A catalytic converter is an emissions control device that converts toxic pollutants, present in automotive exhaust gas, to non-toxic pollutants by catalysing the required chemical reactions. Since 1981, due to the increasingly stringent legislation on vehicle emissions, the "three-way" catalytic converters have been introduced to gasoline engine vehicles. The utilization of PGMs in catalysts fabrication for automotive emission control devices -mainly Platinum, Rhodium and Palladium- has been the prime driving force for market demand growth in the recent years and no alternative materials exhibiting similar efficiency in toxic pollutants abatement have ever been introduced to the market. It is worth noting that 40% of Pt, 81% of Rh and 67% of Pd demand is allocated to autocatalysts fabrication. In 2015, PGMs supply was below demand by about 20 tonnes and it is forecasted to grow in the coming years due to the increasingly stringent legislation on automotive emissions and also, the current irreplaceability of PGMs in autocatalysts. According to the International Trade Centre, in 2015 the European autocatalysts market used 43 tonnes of Pt, worth €1.4 billion, for autocatalysts that classifies Europe as the world’s largest consumer of PGMs. At the same time, European primary PGMs production is insignificant; about 70% of the global production (160 tonnes) comes from South Africa and Russia.

The PROMETHEUS project represents a disruptive innovation aiming to demonstrate and for the first time introduce to the market a novel eco-friendly nano-structured automotive catalyst substituting at least 50% (the substitution of PGMs has been proven to be up to 85%), of the PGMs, while keeping the same performance and reducing production cost and European PMGs expenses/imports and reliance on PGM producers. Five overall objectives set and achieved are:

Overview of the results including their exploitation and dissemination

The key goal achieved in the framework of Prometheus Project is the Development and the Production Up-Scaling of the first Copper Based Commercial Automotive Catalytic Converter. Prometheus has proven that by incorporating Nanotechnology, we can produce automotive catalysts with 85% less precious metals achieving, at the same time, the same catalytic efficiency with Original Euro6d Commercial Catalysts.

A polymetallic nano-catalytic powder has been synthesized in big scale. Furthermore, a Synthetic Gas Bench process has been developed to measure catalytic activity for multigas emission streams in the presence of vapor water. The process has been used in conjunction with a hydrothermal oven for ageing the catalysts under very extreme conditions. Tests have been performed with fresh and aged catalysts using original Euro 6d catalysts as benchmarks. The laboratory tests have proven that Prometheus is of similar quality with original Euro6d catalysts incorporating up to 85% less PGMs.

A comparison between the catalytic activity of Prometheus loaded with 15g/ft3 PGMs and the three benchmark catalysts versus temperature is shown in Figure 1 under rich- and lean-burn conditions. The Prometheus catalyst performed better than the commercial OEM Euro 6 catalyst which is loaded with 101g/ft3. This remarkable result allows for PGM reduction rates even above 85% that is higher than initially expected.

A performance analysis is given in Table 1a and Table 1b for the case of rich- and lean-burn conditions, in terms of the required temperature for reaching 50% conversion (T50) and the maximum efficiency obtained for a given pollutant. As shown, under reducing conditions, T50 near 220oC was recorded for the Prometheus catalytic converter for the abatement of CO and CH4, and T50 near 285oC for the reduction of NO. These values are ~35oC lower of OEM Euro 6 benchmark catalyst for the case of CO and CH4, and almost the same for NO reduction. Similar results were obtained under oxidizing conditions, were the T50 for CO and CH4 oxidation in the Prometheus was 60 and 90oC lower than the OEM Euro 6. Moreover, as shown in Tables, the performance of the Prometheus loaded with only 5g/ft3 PGMs is similar to the OEM Euro 3 catalytic converter that is loaded with 32g/ft3 PGM. The experimental results reveal that all mentioned commercial benchmark EOM catalytic converters can be replaced by a Prometheus catalytic converter that is loaded with a significantly lower amount of PGMs, in the range between 5 and 15g/ft3.

By incorporating Prometheus Catalyst, a single European Car Manufacturer is able to save more than 300million Euros per year in PGM cost. Since the economical impact is big, car manufacturers can invest in optimizing Prometheus to be considered an Original Equipment (OEM) catalyst meeting the stringiest emission standards set by Euro 6d/7 and/or addressing the cold start effect (ie running the combustion engine with lower loading affecting the temperature of the emissions) which make the Hybrid and Hybrid Plug-In Vehicle Catalysts to be very concentrated in PGMs. For the wider society needs, Prometheus can provide cost effective solutions in emission control of Heavy Duty, Off Road and Stationary Applications as well as for Marine and Industrial Applications.